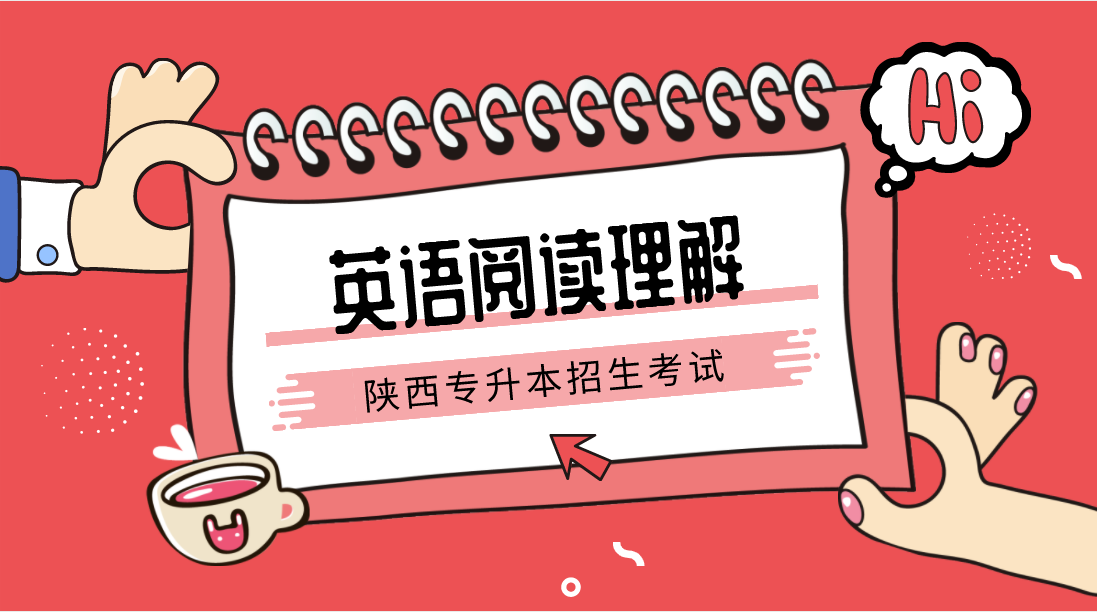 这些真题，相对来说对同学们应该不是很难，但要看同学们够不够努力，过了个年，检验检验自己吧，找到自身的不足，来备战“2019陕西专升本”！赶快试试把！
II. Reading Comprehension（50 points）
Directions: There are 4 passages in this part, each passage is followed by some questions or unfinished statements. For each of them, there are four choices marked A, B, C, and D. You should decide on the best choice and mark the corresponding letter on the Answer Sheet with a single line through the center.
Passage One
The ups and downs of life may seem to have no predictable plan. But scientists now know there are very definite patterns that almost all people share. Even if you’ve passed some of your “prime”, you still have other prime years to experience in the future.
When are you smartest? From 18 to 25, according to I.Q. score, but you’re wiser and more experienced with increasing age.
You’re sharpest in your 20’s. But your I.Q. for other tasks climbs. Your vocabulary at age 45, for example, is three times as great as when you graduated from college. At 60, your brain possesses almost four times as much information as it did at age 21.
When are you happiest? You have the best physical sense of yourself from 15 to 24; the best professional sense from 40 to 44.
Before age 24, we believe that our happiest years are yet to come; over 30, we believe that they’re behind us. A National Health Survey agrees: After age 30, we become more realistic and do not view happiness as a goal in itself. If we maintain our health, achieve professional and emotional goals, happiness will follow.
When are you most creative? Generally between 30 and 39, but the peak varies with different professions.
Mozart wrote a symphony by age eight, and Mendelssohn composed his best known work at 17, but most of the great music was written by men between 33 and 44. Though the peak in most fields comes early, creative people continue to produce quality work throughout their lives. For the “well-conditioned mind”, there is no upper limit.
61. The expression “prime years” in Line 2, Paragraph 1 probably means _________.
A. the age of ideal physical condition B. be early in time or order
C. the period of ideal or peak condition D. the most special days
62. At what age are you smartest, sharpest and with the best physical sense, according to the passage?
A. From about 15 to 25. B. Over 30.
C. From 45 to 49. D. At 60.
63. There are many ways to take happiness with us in our lives EXCEPT FOR _________.
A. maintaining our health B. achieving professional goals
C. achieving emotional goals D. being smart and sharp
64. From the last paragraph, we can learn that _________.
A. for those creative people, there is no upper limit in life
B. for most of us, the peak in most fields comes early
C. the peak varies with different professions
D. how we can keep our creativeness
65. The passage is mainly about _________.
A. the ups and downs of life may have no predictable plan
B. everyone has his or her prime years to experience again after the “prime” in his or her 20’s
C. at what age you are smartest in your life
D. at what age you are happiest in your life

Passage Two
People today are still talking about the generation gap(代沟). Some parents complain that their children do not show them proper respect, while children complain that their parents do not understand them at all.
What has gone wrong? Why has the generation gap appeared?
One important cause is that young people want to choose their own lifestyle. In more traditional societies, when children grow up, they are expected to live in the same area as their parents, to marry people that their parents like and often to continue the family occupation.
Parents often want their children to do better than they do, to find better jobs, to make more money; the high wishes that parents place on their children are another cause of the generation gap.
Finally, the high speed of social changes deepens the gap. In a traditional culture, people are valued for their wisdom, but in our society today the knowledge of a lifetime may be out of use overnight(隔夜).
66. According to the passage, children today would like their parents to_______.
A. give them more independence B. choose a good job for them
C. live together with them D. make more money
67. Parents often hope that their children will_______.
A. make as much money as they do B. be more successful than they are
C. choose jobs according to their own will D. avoid doing what their parents can’t do
68. The generation gap has become wider than before because of_______.
A. the increasing dependence of children on parents
B. the influence of traditional culture on children
C. the rapid changes of modern society
D. the lack of lifelong occupation
69. In today’s society, the knowledge of a lifetime_______.
A. is still very much valued
B. becomes out of date quickly
C. is essential for continuing family occupations
D. helps the young generation to find a better job
70. A proper title for this passage would be_______.
A. Parents’ Viewpoints on Generation Gap
B. Relationship Between Family Members
C. Generation Gap Between the Young and the Old
D. Difference Between Traditional Culture and Modern Knowledge

Passage Three
No one knows for sure why birds migrate(定期迁徙). One theory of migration says that ancient birds of the northern part of the earth were forced southward during the ice age, when ice covered large parts of Europe, Asia and North America. As the ice melted, the birds came back to their homelands, spent the summer, and then went south again in winter. Gradually, these comings and goings became habits. And birds now migrate though much of the ice has gone.
Another theory proposes that the ancient home of all modern birds was the tropic areas. There they lived so well that the region became overcrowded. Many species had to move northward. During the summer, these birds found plenty of room and food. In winter, however, food became scarce and they had to return to the south.
A newer theory is that increasing daylight stimulates certain glands(腺) in the bird’s body and prepares it for migration. One scientist is able to make birds migrate in midwinter by exposing them for two months to artificial daylight. Recoveries of marked birds indicate that they fly north as soon as they are set free. The conclusion is that the urge to migrate is determined by changes in the bird’s body which take place under seasonal changes in the length of daylight. This theory would account for the fact that not all birds migrate at the same time. Each species seems to have its own schedule. The theory would also account for the regular time and routes of migration. Birds arrive at a given place year after year. Unfavorable weather delays them only a few days. Total hours of daylight, rather than weather, start them on the way. How birds find their way to the same place year after year and why they follow their own particular route are still mysteries. They evidently do not follow known landmarks(地面标志), for many young birds migrate alone without the help of experienced adults.
71. We can conclude from the first paragraph that           .
A. during the ice age, the whole Europe was covered with ice
B. the south used to be the homelands of all birds
C. scientists can confidently explain why birds migrate now
D. migration of birds can be explained by the change of ice on earth.
72. The birds mentioned in the third paragraph fly north in midwinter because           .
A. they are specially trained by a scientist
B. they are affected by seasonal changes
C. there is a change in their body temperature
D. they are exposed to extra daylight
73. The phrase ‘account for’ (Line 2, Para. 4) most probably means           .
A. indicate        B. explain        C. prove      D. provide
74. Which of the following can not be inferred from the passage？
A. Birds do not migrate at the same time.
B. Birds usually follow regular routes of migration.
C. Each species has a special reason for migration.
D. Birds migrate to their own particular places every year.
75. The best title for the passage is           .
A. Different Accounts of Migration B. Migration and Weather
C. New Discovery of Bird Migration D. Routes of Bird Migration

Passage Four
If you look for a book as a present for a child, you will be spoiled for choice even in a year when there is no new Harry Potter. J. K. Rowling’s wizard is not alone: The past decade has been a harvest for good children’s books, which has set off a large quantity of films and in turn led to increased sales of classics such as The Lord of the Rings.
Yet despite that, reading is increasingly unpopular among children. According to statistics in 1997, 23% said they didn’t like reading at all. In 2003, 35% did. And around 6% of children leave primary school each year unable to read properly.
Maybe the decline is caused by the increasing availability of computer games. Maybe the books boom has affected only the top of the educational pile. Either way, Chancellor Cordon Brown plans to change things for the bottom of the class. In his pre-budget report, he announced the national project of Reading Recovery to help the children struggling most.
Reading Recovery is aimed at six-year-olds, who receive four months of individual daily half-hour classes with a specially trained teacher. An evaluation earlier this year reported that children on the scheme made 20 months’ progress in just one year, whereas similarly weak readers without special help made just five months’ progress, and so ended the year even further below the level expected for their age.
International research tends to find that when British children leave primary school they read well, but read less—often for fun than those elsewhere. Reading for fun matters because children who are keen on reading can expect lifelong pleasure and loving books is an excellent indicator of future educational success. According to the OECD, being a regular and enthusiastic reader is of great advantage.
76．Which of the following is true of Paragraph 1?
A. Many children’s books have been adapted from films.
B. Many high-quality children’s books have been published.
C. The sales of classics have led to the popularity of films.
D. The sales of presents for children have increased.
77．Statistics suggested that ________.
A. the number of top students increased with the use of computers
B. a decreasing number of children showed interest in reading
C. a minority of primary school children read properly
D. a huge percentage of children read regularly
78．What do we know about Reading Recovery?
A. An evaluation of it will be made sometime this year.
B. Weak readers on the project were the most hardworking.
C. It aims to train special teachers to help children with reading.
D. Children on the project showed noticeable progress in reading.
79．Reading for fun is important because book-loving children _________.
A. take greater advantage of the project
B. show the potential to enjoy a long life
C. are likely to succeed in their education
D. would make excellent future researchers
80．The aim of this text would probably be to _________.
A. overcome the reading difficulty of primary school pupils
B. encourage the publication of more children’s books
C. remind children of the importance of reading for fun
D. introduce a way to improve early childhood reading